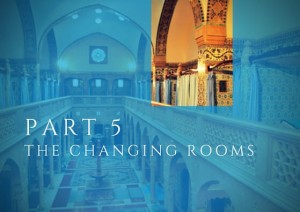 Last time we dealt with the design of the spa reception. Today we make one step further, i.e. into the spa changing rooms. At first glance they may not appear to be especially important but there are a few things to keep in mind.

After carrying out more than 100 audits across the world I have seen very different kinds of hotel spas. We have collected my insights regarding the atmosphere in spas on our blog in a series entitled „Every inch in a Spa is Psychology“.

In a good spa, the guest will receive more than just a simple treatment. They are rather setting off on a journey of impressions. It is advisable to keep this journey in mind when planning the spa or when altering it at a later stage.

The spa’s architecture, furniture, atmosphere and the behaviour of the staff signal the guests important statements such as

The question to ask here is: Which way does a guest of the hotel go? The way to the changing room area should be as short as possible. Depending on whether the guest usually arrives already clad in a bathrobe or from outside still in normal clothes.

Sometimes the changing room area is a highly frequented room – but some other times, it is neglected, too. In a spa you should always apply the principle to keep disturbing “traffic” at times of a high flow of guests as low as possible. This is the reason why the spa changing rooms should be located close to the reception and, above all, outside of the actual spa.

From a psychological point of view there are two predominant topics that affect the guest in a particular way in the changing rooms: change and anticipation. In the changing room the guest transforms from an outsider in everyday clothes to a spa guest with bathing suit and towel. Thus, a spa changing room really becomes a room of change. By taking of their clothes the guest also takes off their everyday routine und mentally prepares for what is about to come. They feel the positive atmosphere surrounding them in view of the following treatment. This topic of change can be adopted by reflecting the motto of the spa and, that way, allowing an outlook on the spa.

EuropeSpa expert tip: In reality, the changing room area seldom has the desirable spa aura and rather reminds of similar rooms in a swimming hall or gym, which come closer to the term “locker room”: simple, clean and functional. But at this point there is the chance to make use of pictures, the right furniture, fragrances, acoustics, comforts and perspectives in order to surprise the guest, enhance the atmosphere and heighten his anticipation of their visit to the spa.