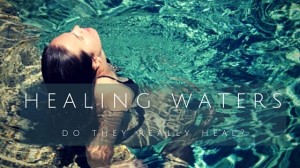 For millennia, healing waters have attracted people’s attention, simply because they were different. They smelled different, for instance sulphurous; they tasted highly metallic or contained a lot of carbonic acid (which made them last longer and “taste better”). Especially thermal waters have always been spectacular, as the sight of freely escaping hot water from the earth was and still is fascinating. These locations often were places of worship and already known for many thousands of years.

In the Swiss town of St. Moritz, for instance, the frame of the carbonated Mauritius spring could be dated back to the Bronze Age. Similar examples exist in Bad Pyrmont in Germany or in Vichy in France. People often believed in the mystical (healing) powers of the water. That’s why even today – in our “cultural memory” so to speak – healing water still remains something special. This is perhaps also related to the custom of throwing coins into public fountains – just like votive offerings in ancient times.

But let’s get back to healing waters: Do they really heal?

The German physician Michael Berliner stresses in his book “Kompendium Physikalische Medizin”, published in 1992, three characteristics of healing waters that can be used for therapies: Its warmth, mechanical properties and chemical composition.

So, you can see that healing waters offer innumerable possibilities. They are not only used for baths but also as drinking cures or inhalations. But usually, they are used in a holistic therapy, in combination with other forms of treatment.